FROM MAINSTREAM TO SILICON VALLEY NOW ADOPTING MINDFULNESS MEDITATION TO THEIR CORPORATE CULTURE.

Cooper was fascinated with mindfulness and he went to the training with Kabat-in at the retreat on a remote mountaintop in northern California.

At the retreat he also met the Congressman Tim Ryan, an Ohio Democrat and Karen May, Google vice president. The mindfulness also attracted to Silicone Valley employees like Facebook and Instagram they were all there at the retreat. They were all agreed that mindfulness meditation helps in creativity and productivity.

The following is a script from “Mindfulness” which aired on Dec. 14, 2014. Anderson Cooper is the correspondent. Denise Schrier Cetta, producer. Matthew Danowski , editor.

Our lives are filled with distractions — email, Twitter, texting we’re constantly connected to technology, rarely alone with just our thoughts. Which is probably why there’s a growing movement in America to train people to get around the stresses of daily life.

It’s a practice called “mindfulness” and it basically means being aware of your thoughts, physical sensations, and surroundings.

Tonight, we’ll introduce you to the man who’s largely responsible for mindfulness gaining traction. His name is Jon Kabat-Zinn and he thinks mindfulness is the answer for people who are so overwhelmed by life, they feel they aren’t really living at all.

Jon Kabat-Zinn: There are a lot of different ways to talk about mindfulness, but what it really means is awareness.

Anderson Cooper: Is it being present?

Jon Kabat-Zinn: It is being present. That’s exactly what it is. 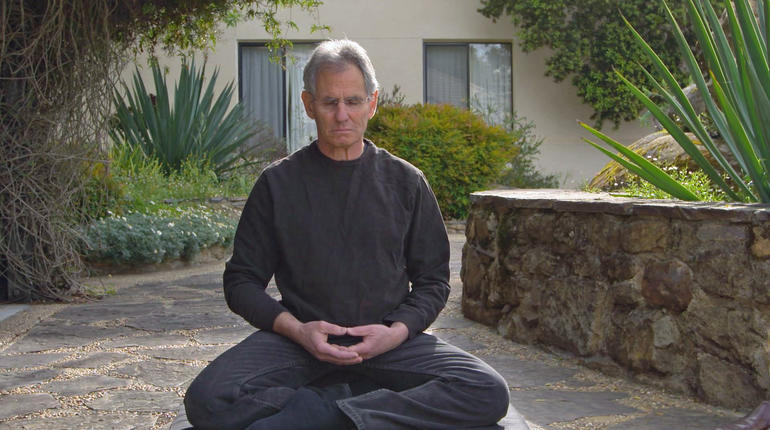 Anderson Cooper: I don’t feel I’m very present in each moment. I feel like every moment I’m either thinking about something that’s coming down the road, or something that’s been in the past.

Jon Kabat-Zinn: So ultimately all this preparing is for what? For the next moment, like the last moment, like, and then we’re dead (laugh) so in a certain way…

“There are a lot of different ways to talk about mindfulness, but what it really means is awareness.”

Jon Kabat-Zinn: Are we going to experience while we’re still alive? We’re only alive now.

Jon Kabat-Zinn, is an MIT-trained scientist who’s been practicing mindfulness for 47 years. Back in 1979, he started teaching mindfulness through meditation to people suffering from chronic pain and illness. That program is now used in more than 700 hospitals worldwide.

Anderson Cooper: So how can you be mindful in your daily life?

Jon Kabat-Zinn: When your alarm goes off and you jump out of bed, what is the nature of the mind in that moment? Are you already like, “oh my God,” your calendar pops into your mind and you’re driven already, or can you take a moment and just lie in bed and just feel your body breathing. And remember, “oh yeah, brand new day and I’m still alive.” So, I get out of bed with awareness, brush my teeth with awareness. When you’re in the shower next time check and see if you’re in the shower.

Anderson Cooper: What do you mean check and see if you’re in the shower?

Jon Kabat-Zinn: Well, you may not be. You may be in your first meeting at work. You may have 50 people in the shower with you.

Kabat-Zinn says mindfulness takes practice…a lot of people start with a training class to learn how to meditate.

He agreed to teach us at a weekend retreat on a remote mountaintop in northern California.

When we arrived we were told there would be no television to watch, no Internet, not even an alarm clock. 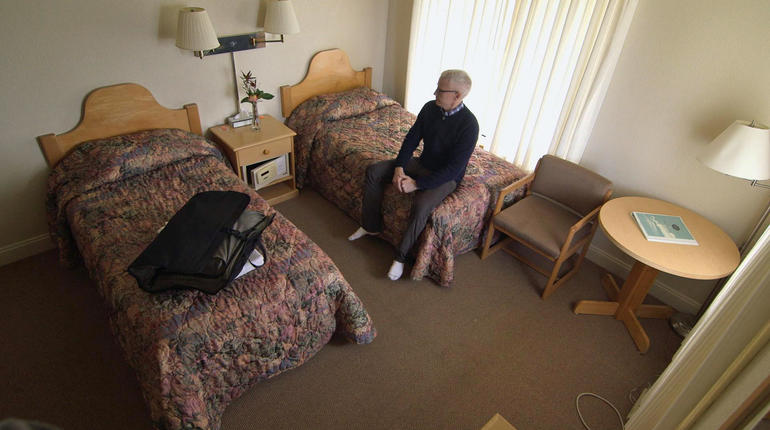 [Congressman Ryan: So I’m checking in.]

Before we began we all had to surrender our last ties to the outside world.

Jon Kabat-Zinn: Put your devices in the basket. I’m contributing my MacBook Air and my iPhone. Happily.

I wasn’t exactly happy to give up my phone. I usually check emails several times an hour.

Jon Kabat-Zinn: So let’s take a few minutes and just settle into an erect and dignified posture.

The retreat lasted three days and most of that time was spent just sitting there, silently meditating – with occasional guidance from Kabat-Zinn.

Jon Kabat-Zinn: There’s no place to go. There’s nothing to do. We’re just asking you to sit and know that you are sitting.

Knowing that you’re sitting may sound simple…turns out…it’s not. The mind constantly wanders.

Jon Kabat-Zinn: The mind has a life of its own. It goes here and there.

To not get lost in thought, Kabat-Zinn recommended focusing on the sensation of breathing in and out.

Jon Kabat-Zinn: Can we actually ride with full awareness on the waves of the breath — at the belly, at the nostrils and the chest. And then simply rest here in awareness.

“Resting in awareness” is one of those phrases used a lot by people who practice mindfulness. But when I tried to do it, it wasn’t restful and I worried I wasn’t doing it right. I kept thinking about work.

Anderson Cooper: I miss my cell phone. I’m having withdrawal, I must say.

Kabat-Zinn, who has written 10 books on mindfulness and led nearly a hundred retreats, describes meditation as a mental workout.

Jon Kabat-Zinn: The mind wanders away from the breath and then you gently and nonjudgmentally just bring it back.

Anderson Cooper: So it’s okay that the mind drifts away but you just bring it back.

Jon Kabat-Zinn: It’s the nature of the mind to drift away. The mind is like the Pacific Ocean, it waves. And mindfulness has been shown to drop underneath the waves. If you drop underneath the agitation in the mind, into your breath deep enough calmness, gentle undulations.

After hours of meditating in 30-minute sessions it does get easier. Those waves of thought Kabat-Zinn described – they’re still there but you get less distracted by them.

At breakfast, we spent time relearning some of the very basic things in life – including how to eat food. Eating a meal in complete silence is a little awkward, but without conversation as a distraction…you taste more and eat less.